are you a professional?

GO TO THE PROFESSIONAL SPACE

1719: Jean-Pierre de Pontet, the King’s advisor in Bordeaux, was one of the pioneers of the Médoc, and chose the land at Perganson to plant his vines. 300 years later, these Médoc vineyards are now legendary. The original chateau fell into ruin, victim of the tumults of history, but its terroir remains a veritable jewel. That is why Château Larose Perganson has endured through the ages, it has retained its soul. The soul of a pioneer, an iconoclast, an innovator which, through opportunity and experimentation, has dared to break with convention. Its micro-cuvees, its innovative wines, its unusual grape varieties, and its audacious blends are the product of its extraordinary history.

At the beginning of the 18th century, England developed a thirst for French claret. New vineyards needed to be developed to keep up with demand; new land had to be found. The ambitious and the enterprising descended on the Médoc and Jean-Pierre de Pontet, the King’s advisor, was amongst the pioneers who believed in its potential. In a stroke of audacity, he acquired the land at Perganson at an auction in 1719, to plant vines on what is the oldest gravel outcrop of the Médoc. It was the start of a tumultuous history for this estate which was to endure inheritances, the construction of chateaux, and even a Russian millionaire’s dream of a dairy farm…

Jean-Pierre de Pontet was a vineyard collector who extended his properties by buying plots around Pauillac for almost 30 years. He also founded Pontet-Canet. In 1742 the fine wine from Perganson, Pontet-Perganson, was listed for the first time by Lawton’s wine brokers and was thereafter regularly valued at the level of the future classified fifth crus.

The estate prospered and took the name Larose Perganson in the middle of the 19th century when Henzy Delaroze inherited it together with the neighbouring estate of Trintaudon, which also produced its own wine. His successor, Count Ernest de Lahens, had great ambitions for Trintaudon, constructing a second château there where he centred his affairs. Although Perganson had a less prominent role at this time, it continued to embody the estate’s history, and lost nothing of its prestige. 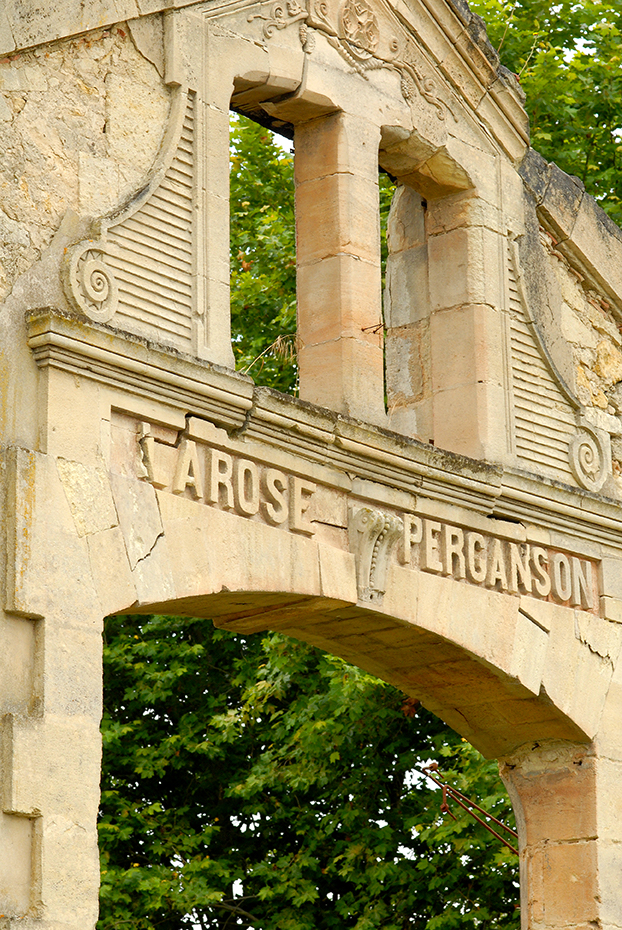 The period covering the end of the 19th century and the first world war was catastrophic for the Médoc châteaux due to the phylloxera epidemic, and Perganson was no exception. But whilst others gradually recovered from 1918 onwards, Château Larose Perganson suffered at the hands of Count Tchernoff, an exiled Russian aristocrat married to a rich American, who cut something of an exotic figure in the Médoc. He decided to make Perganson the heart of his great new project for the future…industrial dairy farming.

The chateau was restructured, its cellars were converted at great expense into an ultra-modern dairy, with steel vats, tankers, and the latest tractors, and its vineyards were given over to pasture. But this terroir that was so miraculous for the vines was too barren to produce grass. The cows produced no milk, and the venture was a resounding failure. The business went bankrupt, and the estate was sold by order of the court to the highest bidder.

In the face of the enduring crisis, in 1935 the government offered grants for pulling up vines in the Médoc. The estate, then owned by a Spaniard, Jaime de Artega Falguerra, was in a state of abandon. Château Perganson was progressively stripped bare, first of its fittings and decorations, and finally its stones. In 1945, all that remained were a few ruins.

The owners that followed, and notably the Forner family who replanted vines in the seventies, concentrated their commercial efforts on Château Trintaudon, which was still standing. Nevertheless, Perganson remained a remarkable gem of a terroir whose personality fully merits being accorded full expression. And indeed, Château Larose-Perganson is still being made and bottled, in small quantities, for the greater pleasure of lovers of fine wine.

In 1986, the Allianz Group (formerly AGF) purchased the property which had become one of the most important in the Médoc both in terms of size and production. A long-term strategic management plan was put into action, making the estate a forerunner in responsible management practices and respect for the environment.

In memory of Pierre de Pontet and his vision, Perganson has retained its own identity and its singular terroir. The first born, it also incarnates a certain audacious vision of the future. Within the Vignobles de Larose group it is a laboratory, a precursor, a terroir that is a tribute to the earth, and to history. It perpetuates the memory of Château Larose Perganson, the exceptional Haut Médoc born in 1719, which today inspires a unique range of visionary, creative and ephemeral wines.